PulseForge Lift-Off (PFLO) is a flashlamp based lift-off process developed by NovaCentrix to address the industrial need to rapidly and economically release polymeric films  from rigid glass carriers. Developed as a laser lift-off (LLO) alternative, some of the advantages of PFLO include: (1) Enabling higher throughput by large-area illumination of the substrates as opposed to highly localized illumination in LLO process. (2) Light absorber on glass carrier increases process reliability and yield by ensuring no direct illumination of the polymeric film and the device stack. (3) Resiliency to pinholes and particle defects on the polymeric film coating as the film does not see any illumination.

Some industries that use PFLO are flexible display manufacturing, flexible sensors and batteries manufacturing, thin silicon wafer debonding in multi-layered 3D chip packages, and in other light-weight electronics packaging applications.

Instead of using an excimer laser beam, the PFLO process uses high-intensity light from a flashlamp to release a polymeric film from a glass carrier. The main difference between the excimer LLO and PFLO process is the presence of a light absorber layer on the carrier glass. Most, but not all, polymeric films have strong absorption of UV light, thus enabling the excimer laser beam (operating in UV) to be directly absorbed at the polymer-glass interface in LLO process. In contrast, the light from the PFLO process has a broader wavelength (mid UV to near IR). One of the primary functions of the coated absorber layer is to prevent the transmission of the light through the polymeric substrate. In addition, PFLO also relies on strong absorption of the light by the absorber layer to promote necessary heating for the release of the polymeric film.

PFLO process is a self-limiting process, as soon the polymeric film is released from the absorber layer coated glass substrate, the thermal transport towards the bulk of the film is limited due to poor thermal contact between the released polymer and the substrate. Consequently, any residual heat on the absorber layer is quickly conducted into the glass carrier substrate instead of to the device stack. Thermal conduction from absorber to carrier substrate continues until they equilibrate. All these factors play a vital role in keeping the top of the device stack relatively cooler. For instance, the LED array developed on the coated PI film (shown below) is still functional after the PI film with the device stack was released using PFLO process. Besides this, our recent studies with in-situ temperature measurements have shown that the temperature achieved on the top of the device stack is not greater than 80°C.

Presence of the light absorbing layer enables the PFLO process to be polymer agnostic. A wide variety of both thermoset and thermoplastic polymeric films have been tested with PFLO and have been successfully released from the same carrier substrate. Some of the polymeric films that were released using PFLO are shown below. These films were released using the same PulseForge equipment. 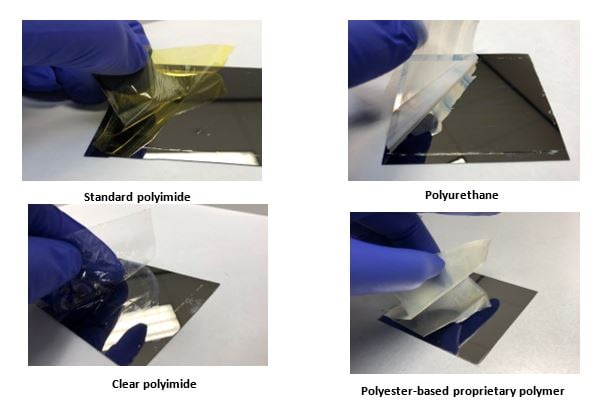 You can find the complete paper on PulseForge Lift-Off here, with additional Q&A and results.

As an Application Engineer at NovaCentrix, Vikram Turkani is focused on guiding the development of the latest flexible electronics enabling PulseForge® technologies. He works closely with various technology development partners around the globe to bring these technologies out as market ready applications. He is also responsible for working directly with NovaCentrix customers, offering process development expertise to enable them with their flexible electronics applications. Prior to joining NovaCentrix, Vikram earned his M.Sc. degree in electrical engineering from Western Michigan University (WMU). His primary focus as a graduate research assistant at WMU was to develop flexible physical and chemical sensors using various printing processes. He has authored nearly 18 peer-reviewed publications in various technical journals and conference proceedings. He also holds a B.E degree in Instrumentation Technology from Visvesvaraya Technological University, Bangalore, India.